The free Myth Encyclopedia that anyone can edit.
52 articles since April 25 2009. 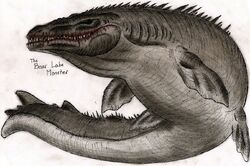 
The Bear Lake Monster is a cryptid appearing in local folk-lore near Bear Lake, on the Utah–Idaho border. The myth originally grew from articles written in the 19th century by Joseph C. Rich, a Mormon colonizer in the area, purporting to report second-hand accounts of sightings of the creature. However, he later recanted the stories.

Community content is available under CC-BY-SA unless otherwise noted.
Advertisement