Ambrosia (Greek ἀμβροσία, meaning "immortality") is a food, or sometimes a drink, that confers either longevity or immortality upon consumption,[1] a practice typically reserved for divine beings. Although the word is commonly found in Greek Mythology, such as ambrosia being delivered to the Olympians by doves,[2] its equivalent is also in Hindu mythology as Amrita, and its concept for immortality has far reaching ancient roots.

In an earlier attestation of the concept for immortality food or drink, from Proto-Indo-European language, is the Sanskrit word अमृत (amṛta), from which the Greek ἀμβροσία (ambrosia) may have derived or been influenced by. In Hinduism, Amrta denotes a drink or food that gods use to achieve immortality. The term appears to derive from the Indo-European form *ṇ-mṛ-tós, meaning "un-dying"[3] (n-: negative prefix from which the prefix a- in both Greek and Sanskrit are derived; mṛ: zero grade of *mer-, "to die"; and -to-: adjectival suffix). A semantically similar etymology exists for nectar, the beverage of the gods (Greek: νέκταρ néktar) presumed to be a compound of the PIE roots *nek-, "death", and -*tar, "overcoming".

In Greek mythology, ambrosia is closely related to another substance, the nectar of the gods. Although, their uses may have been literarily interchangeable,[4] the depictions in Homer's poems of nectar is usually the drink, and ambrosia the food of the gods; it was with ambrosia that Hera "cleansed all defilement from her lovely flesh".[5]

An ancient Egyptian statue of Anubis reads,"...I am death...I eat ambrosia and drink blood..." which hints that ambrosia is a food of some sort.[6]

Because ambrosia has been described as a "delightful liquid", later writers have attempted to identify it as: a sauce of oil, water, fruit juice, a medicinal draught, "sea-dew", rosemary[7], the hallucinogenic mushroom Amanita muscaria[8], or a kind of bee-honey,[9] and even Manna—a food given by YHVH to the Israelites.

Ambrosia's allusive identity doesn't preclude a very ancient and prominent ritual of child sacrifice—the intent to gain immortality, as gleaned from the myths of ancient Sumer. In the influential Sumerian myth of Kiskil-lilla, (the later Semitic Lilith demon) she is described as a mother who devours her children in order that she may live forever.[10] Another Sumerian myth warns of Lamashtu who is said to feed on the blood of human infants.[11] The ancient cult practice of consuming the pure blood of infants, allegedly performed by secret societies,[10][12] 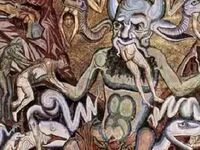 has notably found its way in modern science through blood transfusion techniques.[13] In Monterey, California, a private clinic led by Jesse Karmazin, is pumping blood plasma from teenagers and young adults, to be sold and transfused into older generation clients. The 2016 startup company is called Ambrosia.[14]

Community content is available under CC-BY-SA unless otherwise noted.
Advertisement